Your mornings start quite early in the Serengeti. Being obsessed with the sweet early light and wanting to be out on the plains scouting at first light demands an early wakeup call to your tent. Tanzania’s wake-up calls are a bit unique. They begin with a warm “Jambo”(Swahili for ”Hello”) from your night ranger/guard, followed by “I have your tea, and biscuits sir.” Remember we are talking chilly to cold morning starts, particularly if you have wind. Remember one spends the night listening to the grazing wildebeest, zebras, hyenas, as well as lions roaring in the distance. Then there is the massive hippo that comes thru the middle of the camp overnight. I was there to experience the show!! Did I tell you that you could literally reach out and touch them? No kidding. I awoke to the sound of crunching outside my tent at 2 in the morning only to find zebras literally touching my tent, as they grazed on the youngest new tender grass shoots. Can you say a “total immersion into the Tanzanian Bush”?  Frankly it just doesn’t get any better.

Picture this. It is still dark as you drive out of the camp to the sounds of the Serengeti waking up. As we push the rules a bit, and leave before daylight, anticipation grows and we can hear the faint lion roaring in the distance. Sure enough, the sunrise brings life to the plains. Our local Bushman tracker/spotter Tabu points way off into the distance on the horizon. Tabu has eyes like an eagle. Any human that can look straight into the sunrise and make out a lioness, and cubs more than a mile away is over the top in my eyes.

Adrenaline starts flowing as we drive that way and warm light begins to paint the plains. I begin to discern the silhouette of a lion, and something around it. I’m still not certain though as the light is slowly increasing in splendor, growing into yet another awesome sunrise. A couple hundred meters down the dirt road and behold, a mother Lioness and three cubs.

Now my heart is really pumping. Dreaming of maybe a mother nursing cubs and/or the cubs playing is behavior a nature photographer only dreams of. Wrong!! No dream this time. A mother and her cubs stalking a large Topi( a very fast antelope) in an opening. It was amazing to watch the lioness teaching her cubs with “on the job training”.

Her commanding call to her cubs always garnered respect, as they came running, and stuck by her side. The magical beauty of the three darling cubs was stark contrast to one’s notion of an apex predators of the Serengeti.

Mom and her students were slowly trying to circle a Topi on the open plains with no help from another lion. So the chances of a successful kill were quite slim. Clearly the Topi knew it as he took off running for the hills. Mom also appears to have had some battles as her left ribs shows signs of abrasions. Imagine just how easily they blend in with the tall grass, especially in the warm early morning light. Just spectacular light!!

Every photographer has a style, and if you look at a photographers’ images you will see the trend, or dominate style. Don “get the shot” Hamilton is always looking for the light angle, eye level, and in your face look when ever possible.

Here the Canon 1DX Mark II coupled to Canon’s Award winning 100-400mm II Lens saved the day!!  As I was too close to use my 200-400mm lens coupled to my Canon 7D Mark II, the shot was too tight and allowed very little forward-looking space for the mom.

First lesson the nature photographer learns: Be patient and wait for that different image. Create a stronger image with a stare down and drama, wait out your subject…

Here we see the wider angle and the story unfolding. As you can see in the distance a jackal was also waiting for a kill to happen. As he yelped out to his buddies the cub decided to have a go at the jackal before mom called him back! No surprise! Mom rules here and he returned back to her side. Using less focal length and zooming out allows your viewer to experience the actual Serengeti plains.

Note: The difference in the lighting as the sun angle continued to climb and one begins to lose the warmer tones/hues.

Here’s “Mr.Trouble” cub after his mom gave him a talking too. Seemed like he was in time out and decided to stare me down.

So I did the next best thing. Shot him with my Canon 1DX Mark II.

Note: Clouds were in and out.

Thus I rolled my mode wheel up to AV, ISO 1000, f/5.6, 1600/sec. Fired a test shot, checked the histogram/back LCD and the rest is history. Always stay alert to the changing light and be willing to engage your experience and monitor your exposure. Remember your CAMERA DOES NOT CREATE IMAGES… YOU DO! 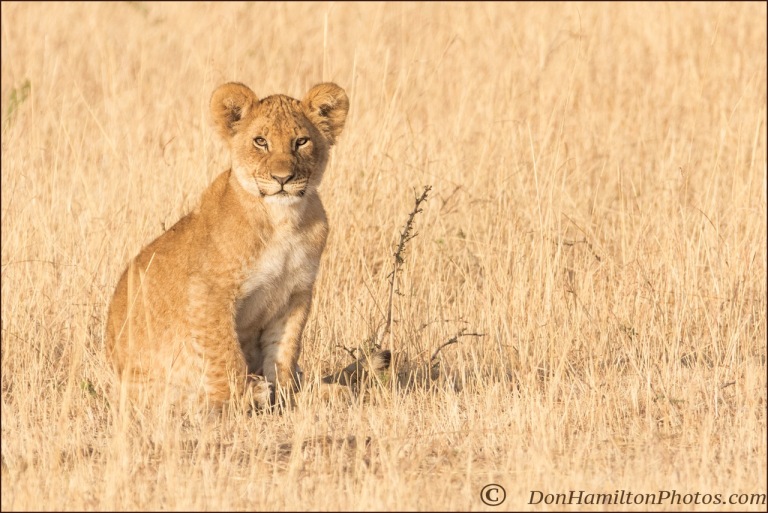 Time to grab a longer focal length. Canon’s Safari Monster 200-400mm with 1.4 Tele-Extender engaged. Perfectly suited for the excessive dusty/dirty environments. With the ability to not have to manually add or remove a 1.4  extender, I was able to keep a very clean sensor. Which is practically impossible with Tanzania’s dusty environment. Coupled with Canon’s game changer 7D Mark II body, which affords me even more focal length with its 1.6 crop sensor, fast frame rate,  and rock solid focusing system it certainly elevated my “keeper” count! 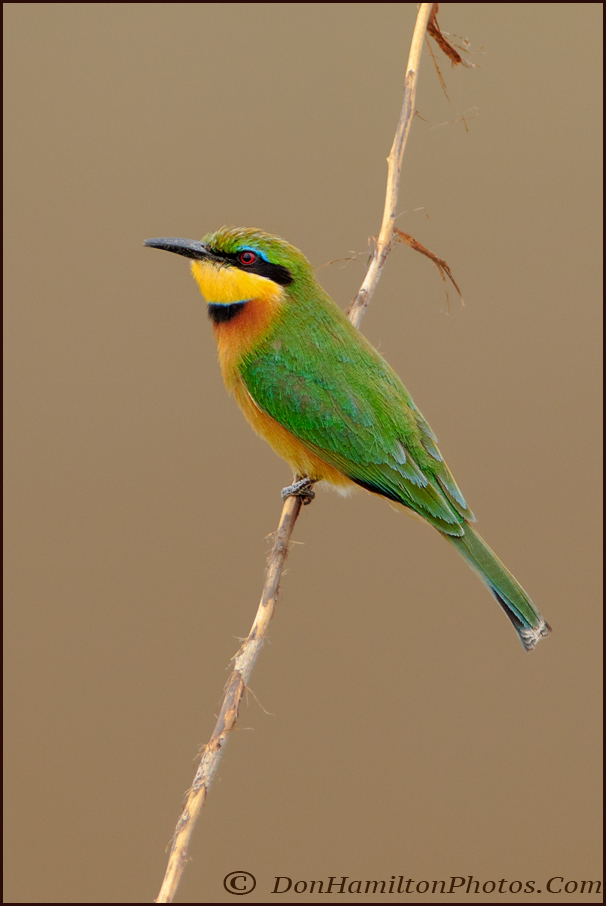 Well as you can see the light was with us for the early morning and with the clouds disappearing the “Sweet Light” show was over around 10 am. No worries let’s go recon some areas for our pm shoot. Now with some fantastic lion images in the tin; we turned our focus to scouting areas where leopards might like. Trees along with deep grasses close to rocky outcrops just might be the ticket… Tabu sees tracks and areas that have been marked, however the sun is getting very hot now along with harsh light almost directly overhead and it’s only 11 am! Did you know we are on the Equator?? Oh well lets head back to the camp to change out CF cards (Bedford’s Promaster line is fabulous), recharge and clean equipment before lunch. Another fabulous lunch followed by a nap was the daily routine. No exception today either.

Usually most folks would head back out for their pm drive around 4pm, but not us! 3pm baby!! Lets get out there and get ahead of the curve while hopefully being in leopard territory as the soft evening light develops.

We headed out to an area of Kopies(rocks that have been pushed up from Volcanic activity millions of years ago). A perfect vantage point for leopards to nap safely, and keep an eye on potential prey.

Folks we have a napping leopard and another one in the weeds. Seems the young male couldn’t wake up, much less give a rip about my over zealous plans to nail some images of this magnificent species. A few facts about the afternoon shoot. First problem, this leopard is perched about 15 to 20 feet above the plains and from my Land Rover the angle was quite steep. Also, flat, dull and dreadful clouds had moved in with an impending storm to my west.

Remember your camera’s metering system works off a 18% grey scale algorithm. With nasty skies and poor light this is a recipe for a poorly exposed image, dark, muddy, and full of noise. AHHH.. experience kicks in and I roll up my exposure compensation to + 1 2/3 stop. Fire off a shot and Voila.. perfection. Next issue: Ok I have a few insurance shots encase Mr. Leopard decides to bolt, however this is clearly not my “look” as mentioned before. Let’s pull back from the leopard and reposition the Land Rover… Dang Don are you Crazy?! Nope, we can reduce the steep angle and allow a tad more room around the entire image. Further more, if this leopard stands up the shot is going to be too tight! You follow? Ahh you say you have been there.. Hey I’ll confess that I’ve hosed a few shots like this before because of my failure to think ahead and envision the shot. Be critical if you wish to create distinctive images.

Ok so now that I’ve moved back all is good, however the light stinks. No surprise, as that’s nature photography folks. One has to work with what you are given.

Bean bag is up on the roll bars of the Land Rover now. Canon 200-400mm with 1.4 engaged married to the Canon 7D Mark II is locked and loaded. Leopard continues to sleep with his head turned sideways. No shot worthy of all of this so far. Next… light worsens with storm approaching.. Oh man are you kidding me?! Come on now… just give me one shot Lord… Well ok may a few..  🙂

Decision time. I have very little light. Only option is to crank up the ISO to 3200 on the Canon 7D Mark II. Failure to expose correctly will most certainly render a very noisy image. More exposure compensation is needed, besides who cares if you over expose the sky. If you don’t you are hosed..

In a matter of minutes the Leopard rolled over stretched and fell back asleep! Gonna need a miracle here folks…rain is close now with wind picking up. It’s now or never….

Leopard wakes up rolls over and looks me right in the eye! My wife is on the Canon 10X42 Image Stabilized Binoculars I bought her. She is beside herself as I’m not shooting! She says what are you waiting for?? The proper head angle honey!

Bam… there it is.. After a short shutter burst, exposure check with my Bedford Camera & Video Hoodman Loupe. It’s high fives!

Can someone give me an Amen?! Can you say EPIC AFTERNOON?! When is the last time you hugged your Canon 7D Mark II?

A few thoughts to consider: Note the dramatic DOF fall off as the focal plane changes. Focal point was on the eye with single spot. Wished for more DOF, however with zero light, no go. Thus, I used 6.3 vs 5.6 to ensure a sharp face as I wasn’t square to the subject.

Hope you are enjoying following this blog. Stay tuned for more adventures in Tanzania with Bedford Camera & Video!

All equipment I used was purchased from Bedford Camera & Video. Trained folks that truly put the “Mom & Pop” camera stores back into perspective. Pickup the phone or consider their website one-stop shopping the next time you are in the market for equipment.