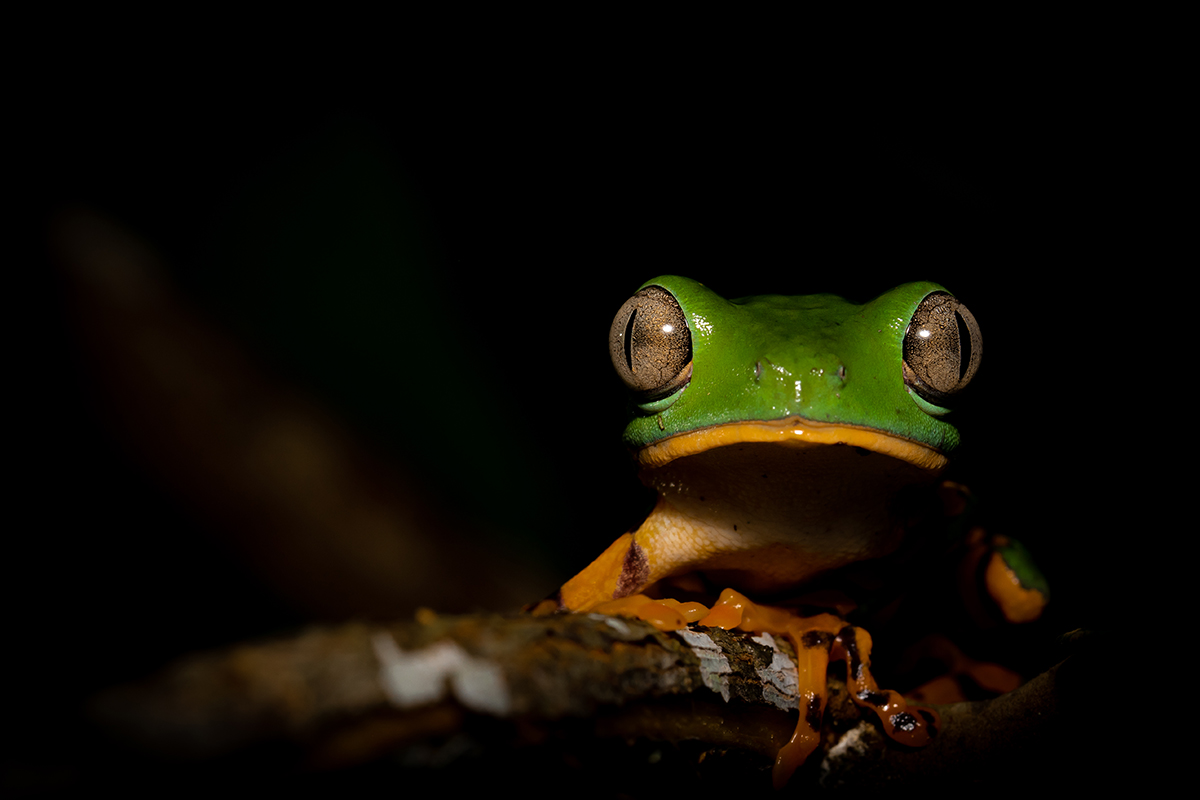 Ryan Borgmann knew he had a knack for the visual even when he was very young, and he got his hands on his first DSLR nearly 20 years ago, when he was fresh out of high school. He tinkered with the camera, but his hobby never went anywhere substantial – until about six years ago, when he found a way to merge his previous interest in photography with his fascination with reptiles.

“I’ve always loved reptiles, but I never saw any images of them that made them seem ‘pretty,’” Ryan says. “Photos either catered to the reptile community or to the extremes of people’s fear of reptiles, but there was nothing in between for regular folks who might just want to see a visually appealing picture of a reptile. I decided I wanted to fill that niche, and today I use my dad as a gauge. He doesn’t like any kind of reptiles, amphibians, or snakes, so if I can get him to say, ‘Oh, that’s a pretty image,’ I know I did something right.”

To capture his photos, the Colorado photographer uses the Tamron SP 90mm f/2.8 VC Macro lens. “This lens allows me to get close enough to show the phenomenal detail and colors of each unique creature,” he says. “Plus, I tend to beat up my lenses pretty good. Before a trip I took to Peru in January, I knew I was going to need a lens that could withstand all I put it through. I had the previous Tamron 90mm macro, but I upgraded to this one before my trip, and I couldn’t have been happier. Its moisture-proof and dust-resistant construction handled all of the grime and humidity like a champ while I was in the mud taking my pictures.”

The aperture capabilities of the 90mm f/2.8 helped Ryan achieve his style and expertly handled the low-light conditions under the Peruvian canopy. “Many of my friends who take photos of reptiles and other animals want the whole snake or frog, plus their backgrounds, shown in great detail,” he says. “I prefer to shoot down lower and focus strictly on the animal, or even just parts of the animal, and let the rest of the image nicely fall out of focus. Opening as wide as I can helps me do that.”

Because carrying around a tripod in the Amazon jungle would have been unwieldy, Ryan shot handheld. “I would find a tree or other object to brace myself against, or I’d lie down in the mud and water and use my body to stabilize the camera,” he says. “I also tapped into the 90mm’s Vibration Compensation (VC) feature. It was terrific to have that extra image stabilization at my side.”

Having a friend as a guide who’d been to Peru 13 times previously, as well as an already fairly deep knowledge of reptiles, helped Ryan anticipate how the animals would react in front of his camera. “The smaller animals, like the frogs, were easier to capture because when they get startled, they simply hop maybe a foot away and then freeze,” he says. “The bigger lizards were a bit more skittish. I had more success taking photos of them at night, when they were sleeping on leaves and more dazed and sluggish. The brown spotted slender anole you see on the leaf here was dozing, but when my light hit it, it lifted its head just a little and I was able to capture this photo. Overall, you just have to take your time and approach them slowly, so they can get used to your presence and not feel threatened.”

Ryan generally prefers to shoot using all-natural light, but because he was doing a fair amount of night shooting, he also used a Speedlight flash. “Sometimes I used a remote trigger so I could move the light around, but I typically had the flash on my camera,” he says. “I also had a simple diffuser to soften the light a bit. For instance, I used the flash for the picture of the reticulated poison frog you see here, with the red back and funky blue sides. Once I trained that light on the frog, the entire background of the canopy went black, so the frog really pops in the photo.”

Getting the reptiles at eye level was Ryan’s M.O. “I prefer that perspective to shooting up at them or down on them,” he says. “If that required getting down in the muck or leaning up against a tree teeming with ants, that’s what I did. I would watch the animal and try to figure out what it was going to do next and where it might land. That way, I could start to map out in my head where I’d position myself to get that eye-level view. I took about 20 pictures of each reptile, with it slightly moving from one place to another, or tilting its head in various ways. From those 20 photos, I was usually able to find a couple that I really liked.”

To help make his photos stand out, Ryan kept on the lookout for patterns, textures, and unique moments. “Patterns in nature, like you see on that reticulated poison frog, are very underappreciated,” he says. “I try to find and capture as many different ones as possible whenever I spot them. I also seek out unexpected happenings, like the elegant-eyed lizard sticking its tongue out. I found it sitting on top of this leaf and noticed the tongue flick, which I’ve only ever seen larger lizards do. The tip of this lizard’s tongue is white, so I knew it would make for a compelling photo if I could just capture it at the perfect moment. It just took some patience.”

Ryan keeps his reptiles as close to their natural look as possible during post-production. “It’s easy with reptiles to overdo it in the editing process and make them look fake if you spend too much time doing color adjustments or focusing too much on one area of the animal,” he says. “So I just make some basic adjustments and maybe bring out the colors of just the eyes, like I did with the banded anole you see here. I left much of the image as close to its natural color as possible, but I did bring out the blue in the anole’s eye just a tad to make it literally more eye-catching.”

To see more of Ryan Borgmann’s work, go to NoCoastPhotos.com. View the full Tamron lens lineup on our website.